I am in Vermont South, vic . I intend to use electricity for heating and cooling, hot water and cooking.
Roof space available in the west 10 panels, north 5 panels or east 11 panels.

My wife and I are both retired and we are able to use electricity to the maximum during the day.
I intend to install 330 kw KW Jinko panels and 5 kw Fronius or Huawei inverter.
Cost wise the maximum difference between the options will be $900- $1200.

At this stage I don’t intend to install batteries. Maybe later on, when batteries become more viable.
I would appreciate your advice.

Can you please send through a photo of your roof, and/or proposed designs from the installers?

Please find attached the roof maps given by installer for the West/North and East. However, I will only know the accuracy of the numbers, when the installer is on site, for the installation.

What is your opinion on the Jinko 330 and Longi 315.
Both achieving he the same output by differing the number of panels.
The Longi panels are being offered at about $300, lesser cost.

What is your opinion on the Huawei as against Fronius inverter both 5 KW.
The Huawei is being offered at a lesser cost of about $400-500. 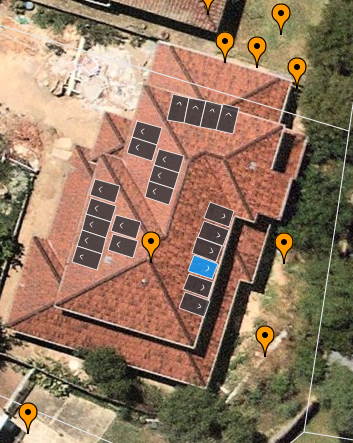 I sent my house roof photo. I hope you received it.

I look forward to hearing from you, in respect of best location and number of panels.

What is your opinion on-

Who presented you with this diagram of where panels would likely go? Often what happens is a sales person will sell a certain size system, but the installer will get to the house on the day and finds out it won’t fit. Then they have to downsize, and you need to renegotiate on the day. It can be really annoying. I would be asking for a site visit before the install by a licensed designer/installer, because your roof is not ideal for solar. The south east roof is really not facing a good direction. You’ll receive only about 70% energy production there compared with north roof.

I would maybe look at getting as many panels as possible on north and west roofs, and just install that many, rather than using east. But on the other hand, if they can make the design work by also putting a few on the east, and the cost is similar, then that could be fine too. Either way, you should work that out before they arrive on the day to install I think.

Regarding panels, Jinko and LONGi are both fine. Given your difficult roof space though, you want higher efficiency panels, so they take up less roof space. Probably the Jinko, but you can check the spec sheets.

Huawei seem to be making good inverters. I’d be very happy with a Huawei, but at the same time Fronius is probably the most reputable inverter brand in the market. So it’s really about your own risk appetite as to what you should choose.

Thanks Marty. As advised, I will get as many panels as I can installed on the North and East. I will get the provider for a site visit, before making a decision.

Thanks. I will site the panels on the North and east.

Essential solar has advised me today that it is possible to install a parallel string on East 6 panels/North 6 panels. One string of 7panels.

This goes against all my current understanding that only 2 strings are possible and limited to 2 directions.

There are situations where this works @David_Arulanandam, which I was also quite surprised about. See the relevant thread here:

Yes no worries installing panels in two different orientations (east and west) in parallel on one MPPT. The strings just have to be the same length (exact same number of panels). It’s quite common to do this when roof space is limited. Best to go as big as possible and install all 6kW for your situation.