Inverter to support battery back up

I have a fairly large system installed (55 SolarEdge panels) with two SolarEdge inverters and 4 LG batteries. The batteries have not been connected because I want at least one of my 2 air conditioners backed up. The installer says this is not possible because the inverters are only rated to 30 Amps, but the air conditioners are 45 and 50 amps. Are there inverters on the market that can handle 50+ amps, or are there other configurations I should be looking at as a solution. The solar contractor has been very unresponsive. Any suggestions would be welcome.

Strange that you ended up in this situation? Might be due to poor communication about the capability of the system. SolarEdge hybrid inverters are rated at 6kW continuous output (25A), which is quite high and is able to run a standard size 5-6kW air-conditioner.

You must have a very large air-conditioner to draw 45 to 50 Amps? Is it an old unit?

Also, a common mistake is to assume that two LG batteries can deliver double the power. This is incorrect as the power is limited by the inverter. Also unlike other battery brands, LG Chem batteries in combination do not deliver more ‘peak power’, it only enables more storage capacity.

Unfortunately, the batteries will be the ‘high voltage’ LG Chem RESU-H batteries. The only inverters which can deliver 40-50 Amps per phase are the dedicated off-grid inverters and they only work with lower voltage 48V or 120V batteries.

Here is a list of all the best known hybrid and off-grid inverters. There is a graph at the bottom which shows an inverter power output comparison. https://www.cleanenergyreviews.info/hybrid-all-in-one-solar-inverter-review-mpp

Thank you for your informed reply. The air conditioners are actually quite new, both less than 5 years. I think the observations about communication are right on. The contractor was a little fast and loose, not even doing a site visit before writing the contract, and now he won’t respond to my questions, even system performance questions under warrantee. Does Telsa power wall provide a possible solution to my needs? Thanks again.

Yes sounds like a sales company who hired contractors to the job and payed them peanuts. A common problem in solar and other industries.

Do you have a photo of the air-conditioner? (the label on the side of the compressor which is outside)
So there are two air-con units which you need to run? What if you just run one of the two units in backup mode? How often do you have blackouts?

I took pictures which I will try to attach. I live in SW Florida, so the main desire for me is to survive an extended power outage. After hurricane Irma, we were without power for 12 days. Avoiding mold is the real need. I think only running one of the units will “get us through” and have indicated that to the contractor and installer. I was actually able to get through to the contractor who indicated he thought the problem could be solved by using a ‘splitter’ to distribute the load across the two inverters. I am surprised this is not a situation which has arisen before. I can’t be the first person to want solar back-up instead of a gas generator, which is actually restricted in our town. 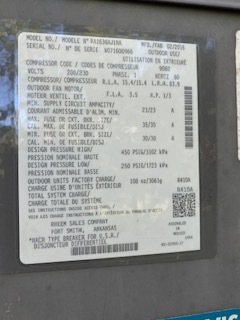 Here is the second photo … only one per post. 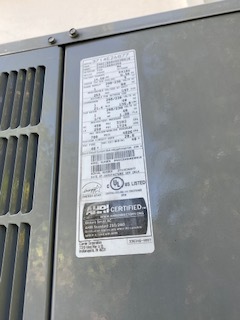 Can’t read the specs in the photos but it looks like an older ‘style’ unit. The modern inverter (split-systems) are very efficient and even a large 6kW unit only uses about 2000W or 10A to operate.

Maybe the problem is the lower voltage 120V used in the US which would double the current draw. Is this a 120V or 240V unit?

I think you will only be able to run one of the 2 air-conditioners in a blackout or risk draining the battery during cloudy weather (assuming the blackout is caused by a storm, hurricane etc)

Here is a higher resolution photo. 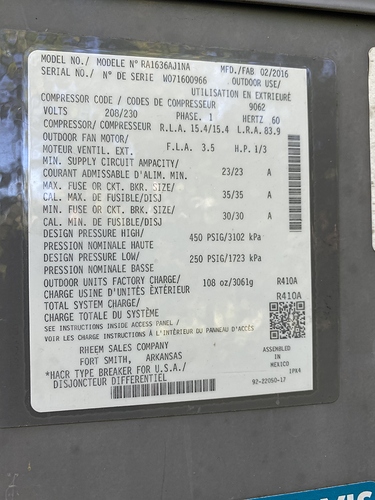 Here is the second unit. 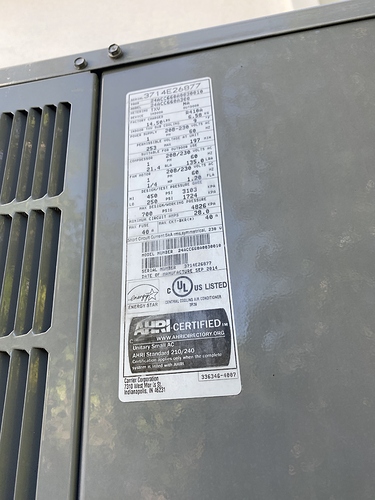 The condensing unit here (RHEEM) has total Run-Amps of 18.9 while the inside cooling unit would have around 5.0 Amps. (three tons unit, depends on the motor used), totaling 23.9 amps. If the other electrical consumption in the house is not more than 4 amps, The inverter should work with this three tons AC. However, the inverter is still small.