Everything Solar has quoted 22 325w Q Cell panels with a SolarEdge inverter. Predicted production is 10,446 kWh for the 7.15 kW system. Efficiency of 71%

I have calculate the system efficiencies by dividing the Predicted Production by the Rated Production (system kW x 365 x 5.67 average hours per day).

Comments are welcome. Why are the efficiencies so different? More downtime for the Q Cell/SolarEdge system?

Hi interesting method to determine efficiency. The issue with the predicted production (provided in quote) is that various companies might use different methods and calculations, so could be inaccurate.

What you should be asking is what size system do I actually need to cover my consumption - Do you know your ‘load profile’ which is when you use energy? Do you have a smart meter which logs your energy use?

Also what is the quality of the panels being offered and is the installation company reliable?

Why are the efficiencies so different? More downtime for the Q Cell/SolarEdge system?

There are guidelines to estimate output, but as Jason says everyone will use different figures. It’s nothing to do with more down time, more to do with different assumptions. There are so many figures to calculate output, starting with solar irradiance, and assumed derating, the actual panel and inverter derating are a very small part of that equation. I would say Everything Solar are probably just being more conservative.

Is this the Melbourne based Everything Solar? I thought they were wholesalers, and their retail arm was called Solar Sunworx. Has that changed? They’re a pretty good mob if it is them.

See more details on Florida solar power in this post:

I have quotes for a few companies that are similar and two that are very different. I live in zip 32952, which is Merritt Island, Fl. I have a lot of sun and don’t seem to have any obstructions. I have a good portion of south and west facing roof space which is optimal in this hemisphere. Sixteen or Seventeen of my panels would be on the second floor roof there is only a small pitch, the rest on the first; all on the south side. We have a tile roof. I hope to replace our gas heater with DH…

Thanks for your input. I spoke with Everything Solar and they assume 4 hours per day average even though our average is 5.67 (according to PVWatts). They say this takes into account various weather paterns the afternoon thunderstorms we get here in Central Florida during the summer.

I do not have a Smartmeter (yet), so I cannot construct a Load Profile which is too bad because…

The gris power comes from SECO, which is a cooperative and is allowed to credit my excess solar production at thier wholesale purchase cost. This means that I buy power from the grid at 10.0 cents per kWh and I sell power to the grid at 8.3 cents per kWh.

Ah, I assumed you were in Australia, which might have been confusing, because I understand there is a Melbourne in Florida also.

Sorry don’t know why I didn’t see updates on this post earlier on in the thread, but I just got it today.

I am pretty sure that Everything Solar is what used to be called Everything for Pools. We had pool solar installed w/ them about 11 1/2 years ago. I think I would read lots and lots of reviews before going with them. We had lots of issues with our system but it wasn’t PV so its hard to compare, everything was under warranty but there was many little costs we had to pay along the way each time a warrantied item was repaired.

I do also like that they are not overselling the production and assuming that you would have the highest possible production all day, every day. I believe their numbers work out just based on them assuming that you won’t always get 5.67 hours of solar production. Some days you will but enough days you will not so being conservative with that figure is commendable. I can say that I logged into my sister-in-laws system tonight, she is in the south Central Florida area and they have 28 LG350Q1C-A5 LG panels, they have microinverters. Today they produced 43.03 kWh which is really good production. Looking at the graph they were producing small amounts of power from 7am and again small amounts right up till dark. But during the course of the day you can see hour by hour how they were producing. They were doing well at 10:30am with 1332 Wh but then shortly after noon they must have had some rain because they dropped down to 361 Wh for a while but then immediately afterwards shot back up to 1238 Wh. The peak hours I see on their system fall usually between sometime after 11am till 4:30-4:45pm but it varies by day sometimes. They are producing outside of those hours but not at peak, so I think Everything Solar’s numbers are a pretty good estimate for peak.

I am not sure what county you are in but there are many, many co-ops that have been going on all around Florida and it may not be too late to get involved to get group pricing with one of them. The group is Solar United Neighbors of Florida (https://www.solarunitedneighbors.org/florida/). There are groups in many states outside of Florida too. They is a Google Groups list and a Facebook group as well.

The co-op isn’t going to be an option for me since we are also looking for batteries and have a tile roof. Our co-op’s pricing for this isn’t a terribly good deal for us, its only .08 cents a watt lower than going with Tesla. Tesla gives us the advantage of installing the Powerwall and our co-op installer was using the LG Chem for a 50% higher price and I didn’t see the advantage. This co-op was not focused on storage, this is just starting to get on the mind of some of the groups. The good thing about the co-op is that it gives you the opportunity to learn about some of these companies and sometimes the reasons why a installer is no longer allowed to bid a co-op or why they choose not to after working w/ a co-op.

I am meeting w/ another Sunpower rep next week, my second. Tesla and Sunpower generally don’t work with co-ops but there are many players in this. Sunpower is doing another $1k off deal through the end of Aug. I know another Sunpower installer, out of my area that tells me the deal I was first offered was not good and I know others that used the same Sunpower rep and got more reasonable prices. Tesla’s deal was surprisingly reasonable. I expected it to be very high because they are a big company with a lot of overhead, but their pricing was one among the lowest.

I’m interested in these numbers that you have reported for your sister-in-law’s system.

Today they produced 43.03 kWh which is really good production.

Looks like they’ve got a 9.8kW system, so that’s 4.4kWh per kW in the middle of summer. I would have expected in central Florida that you would produce that much on average throughout the whole year. And therefore to produce considerably more in the middle of summer. You mentioned the rain shower which might have stopped production for a bit, I’d be interested in what they get on a perfectly sunny day.

Actually I was curious, so I thought I’d snoop around on some public Enphase Enlighten
monitoring systems. The State College of Florida Venice have an 11.8kW system, which on a perfect day in the middle of summer looks to get close to 65kWh for the day (5.5kWh per kW installed). It peaks at about 9kW of power on a good day.

So, with that information, I agree with you @alysaleve, 43kWh seems to be good production on an ordinary day. Also, upon reflection, Florida probably maintains really good solar production in winter as well, so the difference between summer and winter probably isn’t large. In fact I’ve just checked, and on Jan 17 the State College system produced 57.5kWh, which is outstanding. I’m really surprised by how small that gap is between summer and winter. Goes to show how important not just light is, but also temperature for solar PV (hot is bad, cold is good).

because I hadn’t seen an Enphase Enlighten app before. Just to clarify for anyone else that is wondering, the 1332Wh is how much was produced in that 15 min period.

Power vs Energy For anyone that wants to know, and to over simplify it: Electrical power is how much a solar system produces at any given time, and it is measured in W (a kW is 1000W). A solar system’s potential power is also measured in kW - i.e. a 10kW system is a system with panels that can produce up to (and sometimes slightly more than) 10kW of DC electricity. Electrical energy is measured in Wh (a kWh is 1000 Wh). The amount of electricity that you use at home is measur… 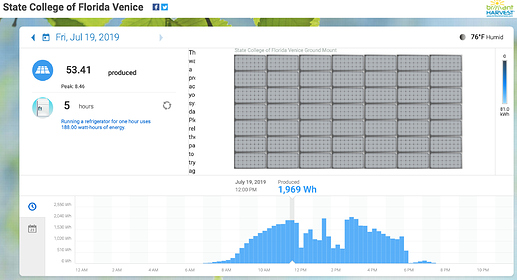 Apologies I did not intend to be unclear. I did consider using a public install for my example but I am more familiar with the one in the family and things like the shading of the roof. Yes I will say that generally speaking I am seeing their system producing great power in all seasons really. In fact its probably worse in the summer due to the more frequent and more significant rain events. 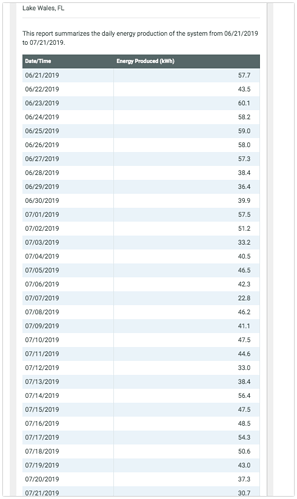 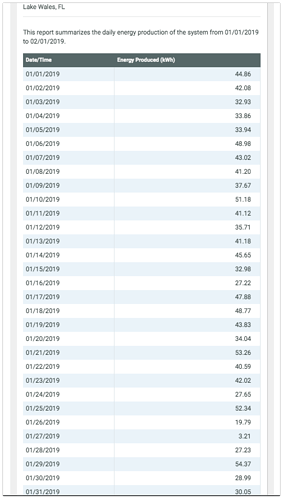 Didn’t know I could upload like this. I will have to say since I calculated what the size of their system, I was surprised they had so much. The highest I see is in 65-67 range in March and April actually. Much of the time it is in the 50s and 60s, lots in mid 40kWh for the day. I myself was quoted on what was labeled as a 11.7kW system which was 43 panels (300W) if I recall correctly (except Sunpower which was their 327watt panels, but they wanted to put in a larger system). I will say I am impressed with the sil’s production. Now whether any of this production is truly being clipped as noted by [dtbaker61] in Sunpower E20 327 AC vs 400W Maxeon 3 I am not sure yet, since I haven’t tried to calculate the numbers and double check.

I’m interested to know how you went with your solar search. Did you end up getting an installation? Do you mind me asking how much it cost in the end, and how the process was? Any snags along the way.