I am planning to install a large system (>100KW system) in Central USA. I am looking for an independent expert to help me choose the best and most cost effective products for my design. I am willing to pay for their time and advice.

Online suppliers can design me a system (for a fee) but only after I select the products. They The local installers have not been giving me many choices for panels/inverters. All the answers I get tend to be a sales pitch.

Here is a burning question I have regarding installation:

I am not sure if I am asking the right questions at the right place. I am pretty much a confused newbie who just started reading a lot about different choices. Any help and guidance is highly appreciated.

This sounds interesting @rk_vc, I think you’re in the right place.

What’s the project for, can you give a bit of background as to why you need such a large system?

Regarding products, what’s your goal with the project? Is there an amount of power you are trying to produce, or space that you want to max out? Are you looking for top quality and performance, or more affordable? What’s your budget? Do you want cheapest up front cost, or best ROI? Have you got some pics of the site? Any shading issues? Do you want to monitor the performance on a panel level, or just to see total output?

Thanks for your response and thoughts.

Our consumption is over 250,000 KWH / month. We have 3 walk in coolers in about 5000 sqft building. But my roof size would only accommodate about 400 72cell panels if I squeeze in.

My goal is is to find an installer who would just charge me labor and let me purchase the parts/panels. However, being in Arkansas, I am not sure I could accomplish that. I am just getting myself prepared to hire handymen to install the racks and panels. Hopefully an electrician can hook up all the wires.

The project cost is going to be in six figures and seems like sourcing it myself would let me breakeven in 3-4 years as compared to 7-10 years if I go with a installer. I am looking for best ROI, knowing that I cannot meet all my energy needs. I want to use up all the usable roof and optimize system output while keeping 3-4 year breakeven point.

There are not much shading issues except at about 10% of the panels. Unless there is an advantage of monitoring individual panel performance, I do not want to monitor 400 panels

Below is rough design with about 360 60-cell panels: 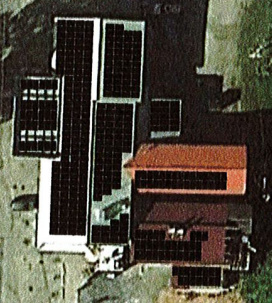 Thank you for your time again.

You mentioned Qcells, It think they would probably be a good balance of quality, performance and affordability. Obviously you would get more generation from using high efficient SunPower or LG, but it would push out the payback period. They might work out to be better ROI in the long run though, not sure, would be interesting to calculate that. Checkout our Best Solar Panels article if you haven’t yet, also Latest Solar Panel Technology article.

As for inverters however, I think you would do well to pay a bit more for panel level optimization, optimizers at a minimum and potentially micro inverters. This will increase your initial outlay, and probably bump up your payback a bit, but there are very good arguments to say you would have a much better ROI. Especially with your roof space, it is not a simple perfectly orientated south facing roof on a single aspect, there is quite a bit going on. Take a look at this thread, there are a few guys that have given insight into the ROI using Enphase micro inverters, you might want to ask them more:

I recently received this advice from a supplier I asked for a quote for my situation in a shaded area, regarding Optimisers Vs Micro inverters. reply is as follows: Using an inverter technology like SolarEdge with optimisers behind every panel, or even using a string inverter like a Fronius with TIGO optimisers behind every panel, still have a weakness when compared to Micro inverters. Optimisers work well when some of the panels are shaded, but in order to continue functioning, they always ne…

You say you don’t want to monitor 400 panels, but there are two things the panel level optimization does 1. monitoring, and 2. making sure each panel performs at it’s best. Monitoring could be pretty useful, if you just whack up 400 panels and a few of them have issues, without that panel level monitoring you wouldn’t know, and if they are connected in a string, they will bring down the entire string of panels.

Food for though. I’m sure there will be other opinions on your install, @Den_Thomson, @mexicansolarguy, @Svarky, what do you guys reckon?

Hey Marty, been talking to rk privately and in my opinion the only way to go is Enphase. With an install as complicated as this and as you said you would need optimyzers on every panel which just pushes up the price of string inverters and still does not give panel level separation. As well, with a need for that much power, there is no way you want to be dealing with a string inverter going offline for even a day or two. As to having an electrician do the install hook up - again with a system this size and this complicated it would give me fits just trying to map it out and ensure everything was hooked up the right way to avoid one section negatively affecting another section. The number of MPPTs is huge for this system and the cross wiring of all the D/C high voltage cables could be a nightmare. Not something I would entrust to someone with little to no experience in solar installs.

On the other hand Enphase IQ 7+ wired to 72 cell panels - 12 panels to a 20 amp breaker and onto the next set of panels 12 to a breaker and so on. All using A/C cables and all wired into a large breaker panel and programmed through one or, at most, two Enphase monitors. Not only is it way simpler and quicker, it is much safer and so much easier to deal with issues in the future. Any electrician or, anyone with a half decent knowledge of basic house wiring can install this system.

My suppliers do not have Qcells, so I have no knowledge of them, however they do look they are a decent low light panel and with the angles the system is being mounted on, low light will be needed to get the production up.

Don’t worry about overloading your space brotha, send me an email at skyfusionconsulting@gmail. Lets talk integration

Thank you @Marty, @mexicansolarguy, @snuffy !!! And sorry for responding late.

You guys gave great input and make me reevaluate my objectives. I will probably scale down my ambitions and go with a 40KW - 50 KW system and them add on later.

I have attached a PV Sketch rough design for reference with 72 cell panels. #1 (about 75 panels) and #2 (about 25) are facing south. #3 (80 panels) and #4 (100) panels are facing east and west respectively. Part of #2 has shading issues in the morning and hence not being used entirely.

IQ7+ can handle the 395Watt panel’s DC input. Take a look at the screenshot taken from the data sheet below and you will find that the AC Output of the IQ7+ clips power past 290Watts. While the system would work fine with the IQ7+, you’d be wasting a lot of power.
He recommends “SolarEdge with the SolarEdge P505 Power Optimizers” over the IQ7+. Is he correct?

Thank you all again. 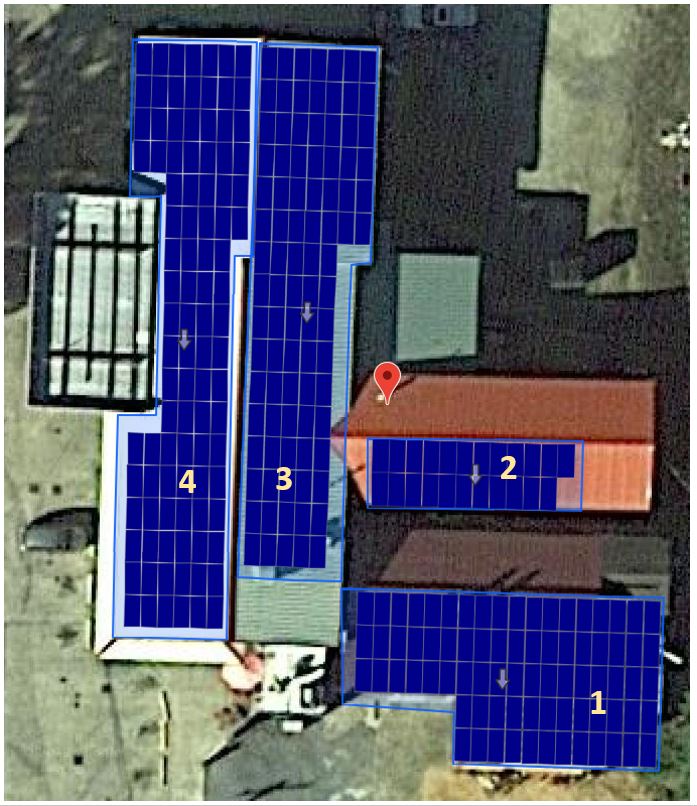 OK, here is my opinion. Anyone who believes that you would be wasting a lot of power does not know what they are talking about. First - panel wattage is determined in a lab under perfect conditions - something rarely (if ever) seen in the real world. In fact, California has a different rating system for panels that, to some degree, takes into consideration basic real world conditions.

Peak production from panels is reduced by many factors including:

Shading issues - Even with power optimizers, my experience and the studies done, show that Enphase still out performs string inverters for overall power production.

Dirt, dust on panels - reduces the power production of all panels regardless of the inverter used.

Angle of panels to the sun - if the panels are not correctly angled to the sun, they will not reach peak performance. This angle actually changes in two ways: 1 - as the sun rises and sets, for most of the day the panels are not correctly angled and the sun is striking the panel at an angle that changes as the sun moves from East to West. This means that for most of the day there is no possibility that the panel can reach peak performance. 2 - as the year progresses the sun is higher or lower on the horizon. So, fixed position panels will almost never be at the perfect angle to the sun for peak production. For example, where I am in Mexico the yearly variance of sun angle is 40 degrees between summer and winter. To get the peak performance from the panels, we would need to adjust them almost weekly by 1 degree.

Heat - while possibly not as great an issue where you are, heat has a detrimental effect on the power production for all panels. Panels are tested at 25 degrees Celsius and, for every degree of temperature rise there is a corresponding drop in panel performance.

Hours of maximum potential production - The core hours for maximum performance is actually a very small percentage of the total day. For most of the day, for the reasons noted above, the panels are not even close to their peak wattage rating.

Finnaly - Enphase has undertaken production studies and comparisons from around the world in many different locations and under all kinds of different conditions and in every instance they have outperformed string inverters (even when equipped with optimizers). As well there have been at least two independent studies that I am aware of that have produced the same or similar results. I have yet to see any studies done by any string inverter manufacturer that says their product out performs Enphase for total power production.