Hi, I have a Must 1800 4kw single phase inverter. It has been working perfect for a bout 2 years, it’s set up to run a/c units that set to only run in the daytime. A timer shuts off the utility input about 1 hour after the first a/c unit comes on and it runs like that all day and the timer turns on the utility about 1 hour before the last a/c shuts off. Today for the first time when the utility shut off the inverter did as well. It doesn’t show anything coming from the batteries. The batteries are at 52volts and the connections test 52v on both sides of the breaker and on the inside connection of the inverter and nothing is loose There are no competent inverter repair shops here that I can find so we are pretty much on our own on this one. It seems there may be a fuse or something but I can’t find it. Has anyone run into this? Any suggestions? I do have someone on staff that is good repairing electronics if there’s a video to follow. Thanks the dog.

It’s good to see an electrician, try to check the batteries connection corroded batt and something a faulty power switch or a blown fuse.

That’s very odd and doesn’t sound good. I’m assuming the inverter will not turn on at all? An internal contact relay may be stuck but if it has a good DC battery connection this shouldn’t stop it from turning on?
Did you disconnect all the loads and try turning it on? There may be an internal fuse on the DC side.

Does the inverter look something like the image below? These inverters are rebranded by many companies (including Must) and unfortunately are known to often fail and are very unreliable. 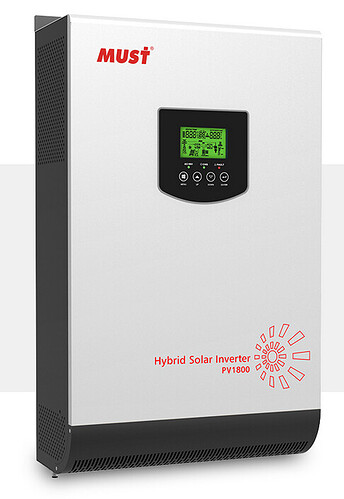 Hi, I know these are junk! When my Boss (wife) first decided on solar she hired a contractor to install it, he supplied 2 of these. He also wired the utility input to the inverter output, didn’t crimp the connectors and did so much other crazy stuff that our electric bill actually doubled. I had been using them fine since I redid everything and aligned all the panels toward the equator, true south here, installed the correct size copper wires and set up more powerful inverters to run most everything. I finally found that there is a “sort of” a fuse, it’s just a thinner piece of of internal bus bar, not a fuse like in their diagrams, it is OK. I assumed that since the DC circuit was complete and tested correct that there was a major fault inside. Both are dead now and I have removed them and relocated the a/c units to run off of our 8kw grid tie inverter, also I repurposed the panels to run on our critical load system to boost the available power. Maybe sometime down the road I will add another set of panels and another better quality inverter to run some of the a/c units so we will be able to run them all at the same time on solar again. It’s funny, she spent more money (about $20000.US) installing 2 of these inverters, 30 panels, 1/2 facing away from the sun, 2 sets of mismatched batteries, undersize aluminum wires than I spent to install an 8kw grid tie inverter with 30 panels, a 12kw off grid inverter with 48 panels, 8 200ah batteries, all adjustable mounts, all panels facing true south(Northern Hemisphere) all solar rated copper wires 1 size oversized, combiner boxes, lightning arrestors and all properly grounded, about $12000US. It’s sad to say that the only people here in PH I’ve talked to that seem to know anything are amateurs like me who have gotten all their help from this site! Thanks again, the dog…